Neil Corbould’s first job in Special Effects was in 1978 on ‘Superman The Movie’. This was followed by work on ‘Saturn 3’, ‘The Elephant Man’, ‘American Werewolf in London’, ‘Victor Victoria’, ‘Pink Floyd the Wall’ and ‘Amadeus’. In 1985, he started work on his first of three Bond films, as a technician on ‘A View to a Kill’ and ‘The Living Daylights’ and he was then given the opportunity of supervising the floor effects on ‘Licence to Kill’. From 1990 to 1996 he worked on many films which included ‘Highlander 2’, ‘City of Joy’, ‘Cliffhanger’, ‘Leon’ and ‘Muppet Treasure Island’.

In 1995 he did ‘The Fifth Element’, which was his first film in the role of Supervisor for which he received a BAFTA. He went on to supervise the science fiction thriller ‘Event Horizon’ which was followed by Steven Spielberg’s ‘Saving Private Ryan’, for which he received a second BAFTA. This was followed by ‘Entrapment’ and the Ridley Scott epic ‘Gladiator’, for which he won an Academy Award. He also received double BAFTA nominations for ‘Gladiator’ and for ‘The Vertical Limit’ in the same year. This was followed by work on ‘The Mummy Returns’ and then a second collaboration with Ridley Scott on ‘Black Hawk Down’, which was filmed in Morocco.

In 2002, came Roland Emmerich’s ‘The Day After Tomorrow’ in Montreal, which earned him his third BAFTA. ‘King Arthur’ and ‘Kingdom of Heaven’ followed and in 2005 he travelled to Australia to start work on ‘Superman Returns’. Supervising this film was a dream come true as Neil’s film adventure started on the original Superman movie. For the work on ‘Superman Returns’ the Special Effects team received both OSCAR and BAFTA nominations for their work. He also collaborated with Ed Zwick on ‘Blood Diamond’ and ‘Defiance’.

In 2013 he has received his third Academy Award nomination for the special visual effects on ‘Snow White and the Huntsman’. Also in 2013 Neil supervised the special effects on ‘Hercules: The Thracian Wars’, directed by Brett Ratner which was filmed in Budapest, followed by The Book of Exodus which reunited Neil for a fourth time with Ridley Scott. 2013 also saw the release of “Gravity”, directed by Alfonso Cuarón. Neil was part of the visual effects team and supervised the practical effects element of the movie, and was instrumental in the process work of getting Gravity from script to screen, working closely with Tim Webber the visual effects supervisor in creating the ground breaking visual effects for the movie.

In 2014 he did “Alice Through the Looking Glass” directed by James Bobin. This project is a fine example of when special effects meets visual effects. A fantastic combination of both techniques that produce stunning special visual effects.

2016 has been another busy year for Neil starting with “Alien Covenant” with director Ridley Scott in Sydney Australia and he is currently working on “Ready Player One” for Steven Spielberg.

In May 2007 he made his directorial debut filming the pop promo “The Price Ya Gotta Pay” for the band “Saints of Eden”. Recently he produced his first short movie ‘Coward’ set in the trenches of the First World War. He is also in the early stages of producing and directing his first feature film, “Billingsgate” about female bare knuckle fighting in the 18th century London.

He is constantly striving for new challenges and goals and is consistently eager to raise the bar in what can be achieved.

Gail has been part of the company since the beginning as general manager and financial controller and has worked with Neil since 1998.

In 1988, she followed in Neil’s footsteps and went on to work for one of the largest special effects company’s in the UK, firstly as a receptionist but it soon became clear that her heart was set on getting involved with the special effects equipment and she was then employed as the Equipment Stores Manager for ten years dealing with customers and enquiries about equipment as well as manually maintaining various pieces of equipment which has given her a great understanding and knowledge of our craft.

All her hard work and dedication has been rewarded as she is now a director of Neil Corbould Special Effects Limited. She is very proud to be part of the team and feels so privileged to work alongside Neil as his enthusiasm is contagious and to be able to witness and share his vision and creativity is inspirational.

Beth’s first job was working as a trainee in the prosthetics department on “Fred Claus” which was filmed at Pinewood Studios and she has also worked on a couple of other projects, gaining knowledge in different areas of the industry.

She joined us in 2007 as our office assistant and has since trained and gained various skills and now with Vikki, is in charge of admin and helps with the day to day running of the business and is a vital and valued member of our company.

Vikki also started work on “Fred Claus” as a trainee and went onto to work on “Clash of the Titans” and “Pirates of the Caribbean: On Stranger Tides” before joining us.

Together with Beth, she is in charge of administration and the day to day running of the company and over the years; since joining us, she has become an asset that completes our team. 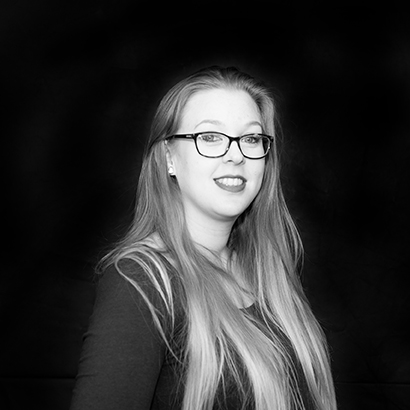